I figured I would give an update on my life, since I have this account and all. My mood has actually been better; the guy who was putting me into the ambulance last month checked twice to see if I really meant that I had uni-polar depression.

But I should probably back up a bit...( It's a long storyCollapse )

I did have a nice Thanksgiving, though...
This pretty much says it all:
http://silverhawk.livejournal.com/118198.html 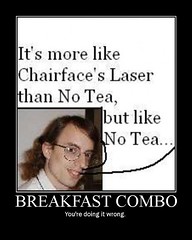 Breakfast Combo
Originally uploaded by owldragon
Vynce wanted to see it, so now it exists. For those of you who don't know (probably most of you), Breakfast Combo is a game somewhat like 20 Questions, except using comparisons rather than yes/no answers. On my recent trip to Middle-of-Nowhere Pennsylvania, the comparison on the poster did come up. Just one example of what happens when intelligent people who are creative decide to be silly. Do you have any idea how hard it is to decide if "a system of equations" is more like the Statue of Liberty or a bar of soap? 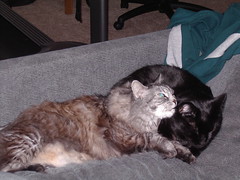 Close Cats
Originally uploaded by owldragon
You know, I said I was going to post a picture of the cats, but I never did. Here's a very belated offering.
Just another short update. Holidays kept me busy, now things are back to normal. I'm still staying at home, but I'm doing more than I was, with volunteering and such. Went to the sleep lab, they monitored my sleep, after careful analysis they suggested a couple of things, I told them I had already tried those, and they basically said they were sorry they couldn't help me. So much for help on that front. In cheerier news, our kitty has company now. We brought Dingbat back from California to reunite her with Mithril, who was getting lonely. The two of them are getting along quite well; I'll post a picture if I can figure out how.
Yeah, it's been a couple of months since the last time I posted, so I figured I should fix that. Also, I actually have something to talk about since last weekend was unusually busy. Most of the time I'm not that busy; my health still sucks, so I mostly stay at home. I've got another doctor's appointment tomorrow, in fact, so I can get him to admit that giving me an extra vitamin isn't going to fix things, so he should just give me my referral to a sleep lab. Anyway, there are actually two things that I did last weekend, so I'll start with the first - ( a psych talk by Philip ZimbardoCollapse )

Anyway, that's what I did last Friday night. I'll talk about Sunday night some other time.
Hmmm. It's been a while. First off, I want to apologize for never sending out the email with contact information that I mentioned in my last post. In JULY. As I have said before, I really suck at keeping in touch. I think a large part of it is ironically because of how isolated I am at this point. It's easier to just not think about old friends than to count how many states away they are. :/

For those who want to know what I've been up to, it was first unpacking and then playing the part of house-husband. The wife is doing well; everything seems to be going great with the new job. ( Whining about health issuesCollapse )

Well, I guess that's it for now as far as my attempt to avoid falling off the face of the Earth. I may post again soon. Or not. I'm not making any promises.
So, we just finished getting the desk and the desktop computer all set up, and hooked up the router. Guess that means I don't have any excuse not to be posting anymore. :)

So, I'm a New Yorker now. We had everything packed and moved out on the 28th, and we got to the new place on the 29th. Of course, when we got to the townhouse, there was nobody to let us in, even though we had left voicemail letting them know exactly when we would be getting there, but they swear nothing like that is ever going to happen again. The moving schedule also got interesting when they decided our things would be delivered on the same day as the first day of the job that was paying for the move. And only the person working in said job was authorized to receive the shipment... But we worked things out, and everything is settled now.

I'm spending most of my days gradually unpacking and organizing things, while the wife is away training on a military base. Okay, she's training to be a civilian teacher, but that still sounds weird. Right now, I'm focusing on getting settled in, both because it's important for us to be able to function effectively here in our new place, and because it means I don't have to think about what I'll do next. I've had plenty to do just taking care of everything that isn't job related, but soon most of that should be taken care of. I still don't know what will happen then.

I should be sending out an email with my new address and phone number Real Soon Now. I'll post again when I get around to sending that out (hopefully tonight or tomorrow), but if you don't get it then and want it, just poke me through email or reply here. I'm sure I'll manage to forget somebody. Anyway, that's all for the moment.
Just wanted to add a quick update - they tested the thing they took from my head, and the tests confirmed that it was benign. Always good to hear. :)

While I'm at it, I'd just like to add that it's a bit worrying when you already hate your new landlord before you've even moved in. I just want them to get back to me because I still don't have an address for my new place when I'm moving in about two and a half weeks. Assuming I can even get the move done, since I can't complete all the forms until I know WHERE they are shipping everything. But they'd better get things straightened out quickly, because we have to be out of this place by the end of this month.
They cut a piece of my head off! Yay! :)
The dermatologist also thought that the bump on my head looked like a something-or-other granuloma. He cut it off and cauterized the spot right in the office. They're doing tests on the thing to be safe, but they don't think it's anything harmful or cancerous.

And now my head should stop randomly bleeding. This is neat.
Collapse